Growing up in rural Greentown, Indiana, Josephine Johnson dreamed of being a musician like the people she listened to on the radio. From Melissa Etheridge to U2 to Joni Mitchell, Josephine studied the music of her idols as she sang in church and performed in school musicals. In college, she became a ukulele and guitar player and started writing her own music as a student at the Savannah College of Art and Design and while at Humboldt State University in Northern California.

Eventually, Josephine would become the first of her blue-collar family not only to go to college but also to obtain Bachelor’s and Master’s degrees.

Now a radio DJ and musician in Savannah, Georgia, Josephine has put the finishing touches on her breakthrough album The Spark. Inspired in part by Maxine Waters, the film Wonder Woman and the occasionally hostile male backlash to it, and her own experiences over the nearly two decades in which she has played guitar and uke, The Spark is a rare artifact: a deeply personal piece of songwriting with universal appeal.

Teeming with gorgeous arrangements by famed San Francisco producer John Vanderslice and keys player/arranger Rob Shelton, the album fills its eight tracks with country and soul textures which work as perfect frames for the voice and words of Miss Johnson.

Armed with her Mainland tenor ukulele and a throat of gold, Josephine weaves hooks and plangent decrees through a landscape of warm horns, analog keys and country textures. Her music exhales and moves the listener across a sweet landscape like a twilight breeze in God’s own country. 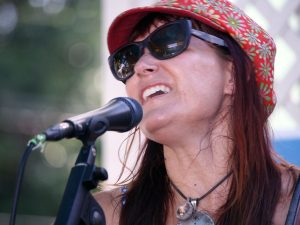