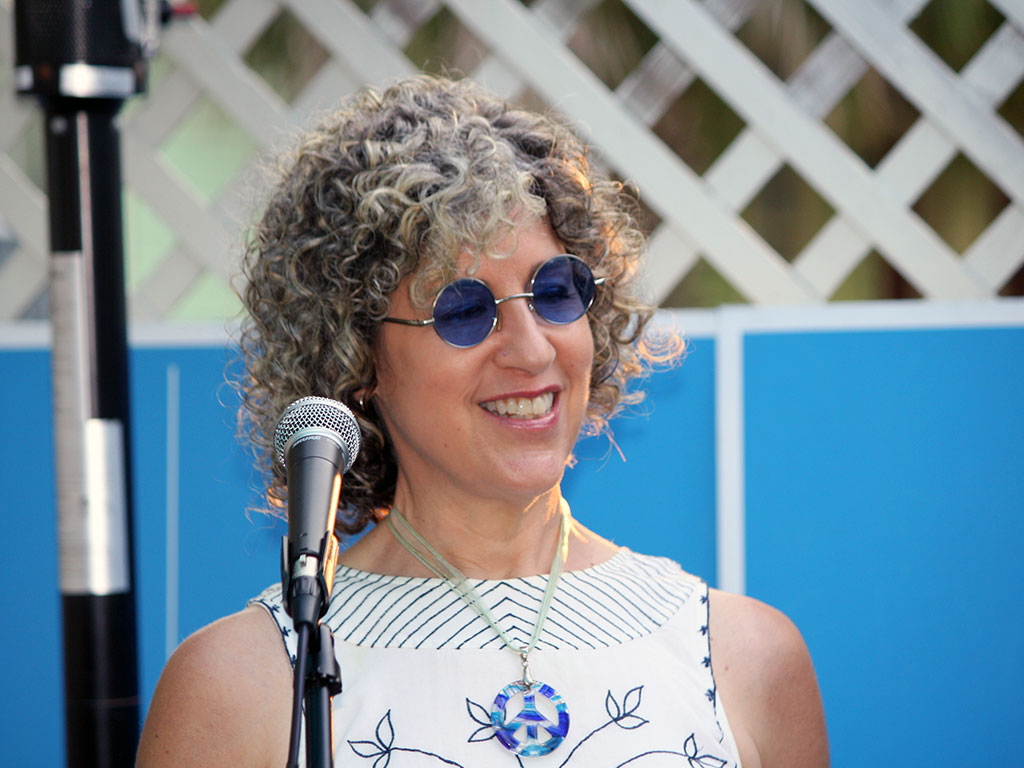 Singer Jane Ogle of the Southern Holiday Jazz Band is interviewed about her many influences, why she’s drawn to jazz and blues, her talented band mates, and much more.

A keyboard in the dining room my Dad used to play so I could sing along. A couple of great chorus teachers in grade school. And musicians for brothers. They listened to great music and invited me to decipher lyrics for their cover band, and eventually invited me to join the band.

The band name bloomed in honor of our very first gig in 2013, a Billie Holiday tribute show

20 years ago or so I started sitting in with Franklin Micare, a very gifted singer/songwriter/arranger. He had a thing for American Songbook tunes and novelty tunes from the 1940’s. Totally fell for the way he made those songs his own. So since then I have been inspired to sing like … not an imitator, not an innovator… an interpreter. I want to feel like and project that I’ve lived the song. Jazz and blues are more open to that approach, and I have collaborated with some great arrangers to do likewise with pop tunes as well.

Talk a bit about your band, the Southern Holiday Jazz Band …

Jane Ogle Trio didn’t really interest me as a band name. It might have made more sense to other people if I chose that name because I’m the only steady member of the band. Depending on availability, there’s been a reliably wonderful rotation of bandmates, including Eddie Wilson, Mitch Hennes, Jeff Powell, Kim Steiner, Jackson Evans, Jared Hall, Marc Chesanow, John Tisbert, Bill Smith, Ryan Kelly, Billy Hoffman, Vuk Pavlovik, and then some. Savannah and I have been blessed to have these musicians in our midst.

The band name bloomed in honor of our very first gig in 2013, a Billie Holiday tribute show.

Sitting in with John Tisbert’s band, Hear And Now, at the Mansion. That’s where I met John, Eddie, Jackson, Maggie Evans, Phil MacDonald, Jody Espina, Eric Jones, Roger Moss. John’s quartet played there every Saturday, and lots of great players would come by and sit in. Before long I was subbing for John, and eventually Eddie Wilson graciously shepherded the production of the Holiday show.

What was the craziest performance you ever had, and why?

I can’t even think of a crazy set of circumstances at any of our SHJB shows. Now we’ve jinxed it and something wild will happen. I can tell you the most stage fright I ever felt at a performance was the 2011 Picnic in the Park. Eddie Wilson produced the show and assembled this terrific orchestra onstage,. There were 5 or 6 featured solo vocalists that night, me included. Christy Wilson and Rebecca Panitzke and I also sang background vocals for the other soloists. How many people turn out for Picnic in the Park, ten thousand? More? I Was Ter. Ri. Fied.

Right before the lockdown, Cory Chambers and I were kinda sorta testing the waters. And then, ya know, lockdown. Now he has Swamptooth going and I’m doing my things… maybe we’ll make something happen someday. I love his very smart/clever songwriting and singing style.

Currently, the outdoor ones. Edgar’s Proof and Provision and Tacos and Tequila are super fun vibes.

In ideal circumstances, I love listening rooms, like Trinity United Methodist Church, and the Roasting Room, and the Unitarian Universalist Church. Tybee Post Theater is terrific, the Jazz Corner is legendary, and Good Times Jazz Bar and Billie’s Place each have a sweet cabaret setup.

There’s an immense amount of talent and not enough venues or budgets to make the most of all that talent. Yup, I said budgets out loud. Same pay for live musicians as the 1980’s. That’s shameful.

A lovely Peggy Lee tribute show (she was a badass businesswoman) at The Learning Center on December 4th with me and Kim Steiner, gigs with John Tisbert keep rolling through the fall and winter, and just swingin’ along day by day hoping everyone stays healthy and has love in their lives.